The downtown mural project began in 1996 when McFarland and Company, Inc., Publishers, commissioned local artist Jack Young to create the mural “History of Ashe Through the Ages.” The mural was located on the Regency Properties building next to the Ashe Arts Center.

In 1998, the Ashe County Arts Council was instrumental in establishing “The Arts District” in downtown West Jefferson by working with the West Jefferson Revitalization Committee to complete two murals, “Spring Wildflowers on Mt. Jefferson” and “New River Traditions.” These murals were funded, in part, by a Visual Arts New Works Grant from the North Carolina Arts Council Handmade in America.

Robert Johnson’s “Spring Wildflowers on Mt. Jefferson” depicts a close up of spring wildflowers, a view of the cliffs and foliage on top of the mountain and a distant view of Mt. Jefferson.

Marianne DiNapoli Mylet’s “New River Traditions” features two musicians playing traditional instruments and other scenes from Ashe County, past and present, the “Virginia Creeper” train, a family enjoying a picnic along the New River and the natural beauty of our area.

In 2001, Stephen Shoemaker’s “Cut at Devil Stairs” was completed on the Dollar Tire Building. The mural is reminiscent of a time when the railroad was vital to the life of Ashe County. This mural was made possible by the collaborative effort and funding of the Ashe County Revitalization Committee, Handmade in America and the Ashe County Arts Council.

In July 2003, R.T. Morgan painted “Somewhere in Ashe” on the side of R.T. Morgan Gallery. The mural is a brilliant and colorful landscape depicting the high country in the autumn leaf season. This mural was funded, in part, by the Ashe County Revitalization Committee.

In 2004, “Wings and Things” was painted on the wall of the Ashe County Cheese Plant Production Building. This mural project was a partnership between the North Carolina Museum of Art, Ashe County High School’s Project 540 and the Ashe County Arts Council. Artists Earle Klutz Thompson and Raines Thompson designed the rural farm scene and led over 125 students and community volunteers in painting the mural over a three day weekend.

In the summer of 2006, another mural entitled “Unity in Diversity” was added to the downtown landscape. The bright and colorful mural has a home on the side of Boondock’s Brew Haus. Winston Salem artist Marianne DiNapoli-Mylet worked with students at the Ashe Middle School to create a mural that reflects the landscape of Ashe County, the music and the people who live and work here. Unity, diversity, peace and tolerance in Spanish border the mural design. Along with volunteers from the Latino Center, students painted the mural on fabric panels that were adhered to the wall with a special adhesive followed by a protective coating. This mural project was part of an Arts in Education Residency Grant funded by the North Carolina Arts Council, a state agency, and the Ashe Middle School. Additional funding was provided by Handmade in America and the West Jefferson Community Partnership and the Ashe County Arts Council. 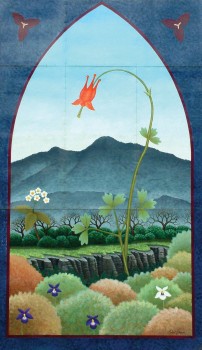 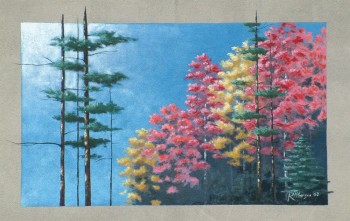 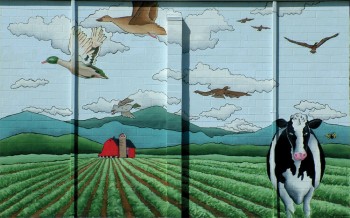